I gotta admit: I’ve been off my game these last couple weeks. Maybe it’s post-election blues, maybe it’s my body calendar being thrown off by an abnormally warm fall, maybe it’s a copied=and-pasted email from my father becoming the most popular column I’ve ever published. Whatever the case, a fog has descended on my brain. So much so that at the football gathering this week, I was asking my friends about doing something on Thursday, leading to this exchange:

MIKE: Um, aren’t you going to be at your parents’ place on Thursday?

ME: For wha…ah crap, it’s Thanksgiving, isn’t it? Okay, how about Wed…dammit, no. I’m leaving to go up there that day.

CAROL: You don’t have to make it sound like a chore.

ME: You spent any time around my family?

LARS: Gotta be honest, brother: this is not you in your best light.

MIKE: Get off his back. He’s just pissed his dad’s more popular than he is now.

On the other hand, I won’t have to spend time around my friends, so…

AWARDS FROM THE COMMISH

FANTASY MATCHUP OF THE WEEK: The Vikings defense vs David Johnson

Once again this week, the Vikes D put Jack, and the rest of the franchise, on their backs and shouted, “This way! To freedom!” They hit Carson Palmer for 4 sacks and two INTs (one of them a pick six) and just for s**ts and giggles, ran back a kickoff for a TD. Lest they be accused of hogging all the scoring, they were also nice enough to defend Cards RB David Johnson by just waving in his general direction. Johnson scored twice and collected over 150 yards of total offense. A fantasy ATM, that Vikes D. On the other hand, the victory leads us to…

ASSCLOWN OF THE WEEK: Robbie

Robbie’s been strangely quiet these last four weeks. Having your favorite team lose a month’s worth of games will mute you on the trash-talking front. Lest we think Robbie had learned any kind of lesson about hubris, he came out with both barrels following a game the Vikes worked HARD to give away but couldn’t and yet another Packers’ loss. Ugh. As if Facebook wasn’t depressing enough these days…

We might as well retire this award with Carol. This week, I had a narrow lead over her going into the Monday night game in Mexico City. We each had a Raiders WR (Michael Crabtree for me, Amari Cooper for Carol) and no one else. With less than four minutes to go, neither of them had done much of anything. I could see it all in front of me: a 5th straight win, a guaranteed winning season and the playoffs practically (if not quite mathematically) clinched. Then Cooper grabbed a short pass, weaved through the collection of mannequins known as the Texans secondary and scored a 35 yard TD. Boom. Carol leads, Carol wins, I open the front door to discover the Fantasy Gods have left a flaming bag on my doorstep. I believe this needs to be reiterated:

(Ned Flanders: My, that’s the loudest profanity I’ve ever heard.)

It was a near thing. Here I had just written last week about the imminent end of Jay Cutler’s career as a starter and the man came out firing, going 12 for 15 and 126 yards and a halftime lead over the previously-hot Giants. Lest you think this is a wonderful comeback story, Cutler reverted to form in the second half, going 6 for 17, taking 3 sacks and tossing an INT as the Bears dropped to 2-8. He also suffered a torn labrum in his throwing shoulder and is expected to miss the rest of the season. This is now widely-believed to be the end of his career in Chicago. Chalk one up for the wily prognosticator from St. Paul. BTW, if you think this whole thing was a thinly-veiled excuse to show another picture of Smokin’ Jay Cutler, you’re dead right. 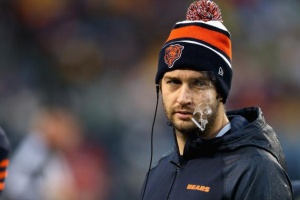 DUMBASS OWNER OF THE WEEK: Robbie

Yep, Robbie was doing double-duty this week. He was so beset with bye week absences and pure stubbornness that he started both Jamal Charles (who may or may not be in Witness Protection) and Rob Gronkowski (despite multiple reports that he was near death [“What that gramma? Want Gronk to come toward light?”]). As a result, Robbie’s point total could be added up by a naked four year old and he was one of the few people this year to lose to MIKE. Dishonorable mention goes to Mike, who, after practically being gifted the game, STILL needed points from Lamar Miller on Monday night to pull out the win. It was just sad all around.

QUOTE OF THE WEEK: Walt Anderson

The ref announced this to the crowd after nearly the entire Titans offensive line got moving before the play: “False start … everyone but the center … offense.” You want to make the NFL fun again? It needs more smartass refs. Oh, and more Smokin’ Jay Cutler…

Look, it pains me to admit that Roger Goodell or any of his minions might have gotten something right, but…(sigh) I like the new extra point rule, which moved the kick back to the 15 yard line and essentially turned it into a 33 yard FG. This week, kickers missed 12 PATs; four more than were missed during the ENTIRE 2014 season (the last time the PAT was taken from the 2 yard line.) Of course, every talking head in sports (the equivalent of an extrovert with ADHD) desperate talk about SOMETHING, will weigh in on this. Here’s my two point rebuttal (you see what I did there?)

1, I’m in favor of ANY change that adds more strategy to the game. If an extra point is missed, the coach now has a decision to make for nearly every TD after that. Do we make up the missed PAT by going for two? How many possessions are we down? How many are we ahead? What might be the long-term impact of going for two and missing? The whole thing has re-engaged the extra point as an integral part of the game.

2, Lest we think 12 missed PATs represents an epoch-shattering change to the game, allow me to point out that the success rate for extra points is STILL 94 percent. It’s not as if the NFL is irrevocably changed. A little spice has been added where needed. Not a bad thing.

And finally, in honor of Jon Stewart (Jon, we need you right now, brother) I give you…

YOUR MOMENT OF ZEN: In defense of flag football

This past week, I actually took in the Thursday night game between the Saints and the Panthers. (I usually ignore it.) Near the end of the game, Panthers All-Pro LB Luke Kuechly suffered a concussion on what appeared to be a routine play. Sarcastic as I get, please know I’m being genuine when I say that it was an incredibly sad sight to see Kuechly sitting on the field, sobbing. (This was either the irrational response one sometimes gets to head trauma or Kuechly’s frustration/sorrow at having suffered his second concussion in 14 months.) I’m sincerely hoping the Panthers are careful with Kuechly and hold him out until they can be 100% certain he’s safely ready to go.

They certainly have to be, because Kuechly will not do it for himself. When asked last summer if he’d consider retiring early due to head trauma, Kuechly said, “No, no. You love the game, you love everything about it. I’ve been playing since I was a little kid, and there is good and bad with everything you do. You have to take the good with the stuff that might not be as good. I love the game of football, and I’m going to play as long as I can.” That’s admirable in terms of dedication to the job, but one would have to ask Kuechly if he’d still feel the same way later in life (assuming he’s still capable of answering the question.) If you stop to think about Pee Wee football, junior high and high school football, college football and the NFL, it’s scary to think that if someone like Kuechly played until he was 40, he’d be looking at over 30 years of suffering SOME kind of head trauma.

I’ve written at length about how the NFL has fumbled its approach to dealing with concussions suffered by current and former players. But there’s the question of how much can really be done going forward. The league faces the stark reality that players have gotten bigger and faster while the bone and fluid protecting the brain have not. There’s only so much that can be done. While it may not be a definitive answer, one of the things that may help would be the NFL embracing flag football at the youth level.

With what is known about head trauma, particularly on developing brains, the idea of playing tackle football in full pads when you’re younger is becoming inexcusable. Delaying the introduction of pads and full contact as long as possible may be a way to save a large number of young people at best and the NFL at worst. No less an authority than Drew Brees advocates for flag football, saying he didn’t play tackle football until he reached high school. Brees said, “I feel like once you put the pads on, there are just so many other elements to the game and you’re at the mercy of the coach in a lot of cases too. And to be honest, I don’t think enough coaches are well-versed enough in regards to the true fundamentals of the game especially when the pads go on at the youth level.” And really, if you can’t take the word of a future Hall of Famer…

All that said, it still may not be enough to save the game. Rule changes such as not leading with the helmet have been implemented at all levels, but it’s still up to coaches to teach those fundamentals. We may have to wait a generation or two before we’ve got coaches who played the game under this new protocol. Add in the barbarian mindset that says, “I don’t care about concussions. I love football. I’ll accept the consequences.” That’s great when you’re in your 20’s and have your health. These guys might feel differently when they’re in their 50’s and can’t drive around the neighborhood without getting lost (assuming they can find their keys and/or car in the first place.) You can further add in the difficulty of applying a long-term solution in a league whose short-sightedness is legendary. I’m not entirely certain flag football can save the NFL.

But it won’t make things any worse. And maybe that’s all we can ask at this point.