I’ll say this right up front: I don’t like Floyd Mayweather. There’s no lack of reasons. He’s arrogant. His fights are generally boring. He’s spent time in jail on an assault charge. But perhaps more than all of that: he screwed up a book I was going to write.

They say everyone has one book in them (which is kind of frightening when you realize that includes the people you meet on the bus) and this is true of me as well. I had one great sports-related book that I was ready to write. I was going to write the story of how one of the greatest fights in boxing history, the match that might have saved an entire sport, never took place; the twisty-turny tale of the Floyd Mayweather-Manny Pacquiao fight that never was.

And then those two a**holes went and made the fight.

Sure, I guess I could write about how the match came together too late to save boxing and didn’t do a lot to help either guy’s legacy and didn’t really live up to expectations. But it would have been more fun to speculate about a great fight that never happened because the guys involved were more interested in winning a PR battle than an actual boxing match.

Anyway, Floyd came up in the news again recently because he just signed for a “mega” “fight” against UFC star Conor McGregor. It’s been in the works for several months (because any negotiation involving Floyd must have at least as much palaver and public posturing as the cease fire in a holy war.) If you aren’t a fan of either boxing or MMA (and if you aren’t, I can’t imagine why the hell you’re reading this, but still…) you might picture this “fight” as being some kind of boxing-MMA hybrid. And you would be wrong. It’s a straight-up boxing match between one of the best pure boxers of his generation and a guy who’s never so much as fought Golden Gloves.

And for some reason, people are excited to see this fight.

Yes, Floyd is 40 years old. Yes, it’s been two years since he’s been in the ring. Yes, McGregor is an unpredictable wildman with a vicious streak. But no, this is NOT going to be a competitive fight. For the simple fact that boxing and MMA are two completely different disciplines. The only things they have in common are a ring (and the rings don’t even look alike) and the general principle of one guy trying to beat the crap out of the other. Beyond that, they’re two completely different sports. It’s like pitting Usain Bolt against Dale Earnhart Jr. in a 100 meter dash and expecting it to be competitive because, well, they’re both racers.

And yet, come August 26, you’ll have millions of pay-per-view subscribers doing this: 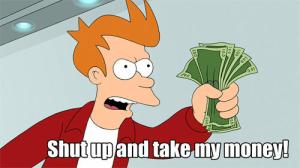 Now, if you’ve followed Floyd Mayweather’s career at all, you know there’s nothing new under the sun here. Floyd has obsessively pursued two goals: enhancing his legacy and making money. And he consistently puts himself in the safest position to do both.

When the story of Floyd Mayweather’s career is written, he’ll want you to read the part where he’s defeated the likes of Manny Pacquiao, Oscar De La Hoya, Canelo Alvarez, Miguel Cotto, Shane Mosley, Ricky Hatton, Arturo Gatti, Jose Luis Castillo and Diego Corrales. The part he’ll ask you to ignore is how he cherry-picked every opponent by fighting them before they were ready (Alvarez) or more often, well past their prime (De La Hoya, Cotto, Mosley, Gatti). Mayweather has never fought a top-rated contender who’s in the prime of his career. If the opportunity ever came up (as it did frequently with Pacquiao) Floyd found reasons to drag the negotiations out until he was sure he could win (as he did with Pacquiao). Taking a big money fight with a guy who’ll be WAY out of his comfort zone is just how Floyd does business. He’ll make his money and then hope, when the name of another beaten opponent is added to the list, that nobody looks at the context.

And McGregor’s reasons (his real reasons, not his stated reasons) for taking this fight fall right in line with Floyd’s M.O. You see, there’s a thing boxing, wrestling and MMA ALL have in common: you make your money by fighting someone who can draw. Floyd Mayweather is a draw. Whether YOU are a draw or not, you’re going to make more money by fighting a draw. It’s not as if McGregor’s short of UFC opponents, but there’s nobody there who can make him the kind of money Floyd Mayweather can. All those past-their-prime fighters I named? Why would they take on someone they couldn’t beat? Because Floyd Mayweather was their last big payday. Why would McGregor agree to fight someone in a discipline he can’t possibly master in two months? Because UFC will never provide him with a check containing this many zeroes. You want to make money, you do it on Floyd’s time and Floyd’s terms.

And Mayweather’s choice of McGregor is no accident, either. McGregor is one of the great trash talkers in the UFC (and if you have even a passing knowledge of that company, you realize there’s no shortage of competitors in that field.) To borrow a bit of pro wrestling parlance, McGregor can “cut a great promo” and “talk them into the building.” His mouth will work overtime for the next few months, convincing people he can win and generally writing checks his ass can’t cash. (BTW, this might be the last time I can use that metaphor. Going to miss it.) The reality of McGregor’s challenge is irrelevant. He just has to convince people he can do it.

And why not, really? There’s absolutely no downside for either guy. Floyd gets another big name pelt to add to his wall. McGregor gets a huge pay day and the out of saying, “Well, I’m not really a boxer. What would have happened if Floyd had stepped into the octagon?” It’s the closest thing you’ll get to a straight-up exhibition fight because NEITHER guy is really risking anything. No harm, no foul.

Oh, except for the sport of boxing.

You see, this “fight” comes at a time when boxing is actually on the upswing. Or at least it should be. While the heavyweight division (traditionally, the straw that stirs boxing’s drink) continues to be a lost cause, there’s a generation of good young fighters in the lighter weight divisions who are coming into their own and providing competition for some older fighters who have only lacked a decent opponent. Two big money fights were on tap for this summer: the rematch between light heavyweights Andre Ward and Sergey Kovalev and the middleweight showdown between Canelo Alvarez and Gennady Golovkin. The announcement of the Mayweather-McGregor “fight” occurred during the lead up to last weekend’s Ward-Kovalev tilt. The Ward-Kovalev match was already struggling to draw interest and the announcement of Mayweather-McGregor completely wiped it out. Alvarez-GGG (as Golovkin is known) will not take place until September, but will be held three weeks after Mayweather-McGregor. Take a guess which fight is going to occupy the headlines this summer? In wiping out two big-time fights for a farce that will do NOTHING to help the sport of boxing, Floyd hasn’t so much bitten the hand that’s fed him. He’s put a grenade in it.

(Then again, if the tradition in boxing had been to look after the sport as a whole rather than your own short-sighted needs, it might not be in the condition it’s in today, where its only advocate is a United States Senator who may have gone senile without any of us noticing.)

So feel free to go ahead and order Mayweather-McGregor if you choose. Me? I wouldn’t cross the street to watch it for free. I’ll wait until September 16 and probably kick in some good money to watch Canelo Alvarez and Gennady Golovkin.

But I get the sinking feeling I’m in the minority.